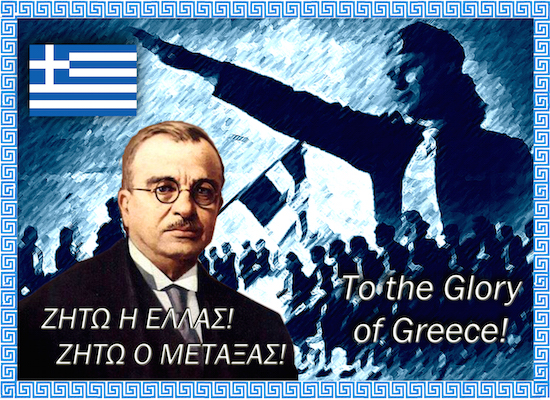 Ioannis Metaxas, a general in the Greek army and a student and admirer of German Military order, having studied at the Prussian Military Acadamy was a minor politician who was appointed by King George as minister of war in 1936. He became prime minister upon the death of Constantine Demertzis, in the caretaker government of that year. In August of 1936 with the backing of the king he established a military dictatorship, claiming that it was necessessary to thwart a communist takeover during this period of political instability. His dictatorship was in line with the european trend of totalitarian regimes during the years between the two world wars, and he saw himself as another Hitler, Mussolini, or Franco though in foreign policy he was more aligned with Britain. All children from the age of 6 to7 had to join the "national youth" (EON) and dress in dark blue uniforms, wearing the fascistic emblem on their hats. The communist party was outlawed and the leaders imprisoned. Even non-communists like George Papandreou were imprisoned. Like Hitler's Third Reich he preached of a Third Hellenic Civilization that embraced the values and ideals of the ancient Greeks, and the Christian-Byzantine empire. His ruthless interior secretary, Maniadakis became notorious for torturing communists and left wingers. Though Metaxas wanted to remain neutral during the war, Italy's invasion and ultimatum led to the famous ochi (no!) which he is most known for and served as redemption for a man who was considered pretty much of a jerk by many, especially those who ended up in prison for their political beliefs. That being said you can't argue with the fact that he was a patriot and was able to steer a path that had both Hitler and Great Britain believing that Greece was on their side. He died just two months before the German invasion that was made necessessary by the Italian army's defeat at the hands of the Greeks.

Return to History of Greece: Biography